Citizen Bravo, Raymond MacDonald and a host of friends from the crème de la crème of Scotland’s music scene present Return To Y’Hup: The World of Ivor Cutler, a celebration of the life and work of an artist of unrivalled musical and poetic vision. This ambitious project is a pioneering experiment in the field of imaginary archaeology: a sonic conjuring of a decades-old fictional island.

Noting Cutler’s absence from an exhibit about the history of Scottish pop music at the National Museum of Scotland, Matt Brennan (Citizen Bravo) and saxophonist/composer Raymond McDonald (Glasgow Improvisers Orchestra) decided to set the record straight. They wanted to pay homage and re-affirm Cutler’s status as a national treasure, uniting their two very different two musical backgrounds in a freaky and fruitful collaboration. The core team was completed by producers Malcolm Benzie (eagleowl and Withered Hand) and Andy Monaghan (member of much missed Frightened Rabbit). 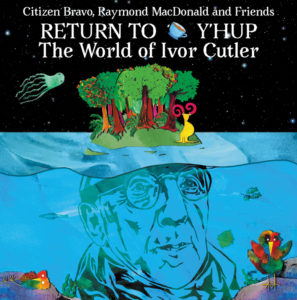