Vault back to the dawn of 2009. Signed the previous year to Glasgow independent label Chemikal Underground are The Phantom Band, a six-piece group that melds folk, Krautrock, the blues, art-rock and anything else that comes to hand, lacing their idiosyncratic, intricate tapestries with effortless pop melodies delivered by the mahoganied baritone of singer Rick Anthony.

“A record as auspicious and accomplished as it is unforeseen” – Keith Cameron, Mojo. 4/5 stars

“This kraut-folk groove-fest could have been bashed out by The Beta Band’s little brothers” – Camille Pia, NME. 8/10

“Were they from Brooklyn rather than Glasgow, Checkmate Savage would have been acclaimed as a benchmark album of 2009” – Michael Hann, The Guardian. 4/5 stars

“This debut is fearlessly ambitious and unexpectedly commercial” – Steve Jelbert, The Times. 4/5

Fans of the group’s heady brew swiftly snap up all vinyl copies of the album, the result being stratospheric prices for those searching for it on the secondhand vinyl market.

A decade on, Chemikal Underground is proud to announce the imminent rebirth of an album that remains as spectacularly imaginative as it was the first time round, presented in a package that does 100% justice to the original songs, which were deftly produced by Paul Savage – whose credits include Mogwai, Franz Ferdinand, King Creosote, Deacon Blue and many more – at the label’s affiliated recording studio Chem19 in Lanarkshire and Franz Ferdinand’s studio in Glasgow.

Deserving of a place in every record collection worth its salt, the stylistically wide-open, moonstruck delights of Checkmate Savage are, for the first time, spread over four sides of heavyweight vinyl housed in a gatefold sleeve, with a download code for MP3 versions of the album’s nine songs. The record will be available exactly 10 years on from the release date of the original album.

This new edition – cut from the original masters – is an essential acquisition for those with an appetite for wildly creative, mischievous and aurally captivating music. A no-brainer, in other words.

Released on the 25th of January 2019. Available for pre-sale here. 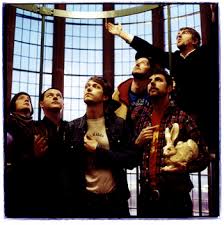